Vitiligo is an acquired skin disorder caused by the disappearance of pigment cells from the epidermis, and results in well defined white patches that are often symmetrically distributed. It is a cosmetically disfiguring and stigmatizing condition that may lead to psychological problems in daily life.

It occurs worldwide in about 1% of the population and in more than 50% of patients, it occurs between the ages of 10-30 years. It affects both sexes equally, though women more often seek remedy.

Pigment loss in vitiligo, secondary to melanocyte loss, results from a complex interplay of genetic, immunological, environmental and biochemical events in a permissible genetic milieu. Various recent studies have shown that oxidative stress is largely responsible for biochemical and immunological loss of melanocytes. These result from defects in the handling of reactive oxygen species (ROS), particularly H2O2  produced in the melanocytes and the neighbouring keratinocytes. ROS and T-cells act in concert to destroy or incapacitate melanocytes in a vicious cycle of cellular fatigue, cytokine imbalance, immune attack and apoptosis. The synthesis of melanin by melanocytes also predisposes to ROS generation, and melanocytes, therefore, operate in a potentially hostile environment. Melanocytes seem to be uniquely fragile in people with a tendency to vitiligo. 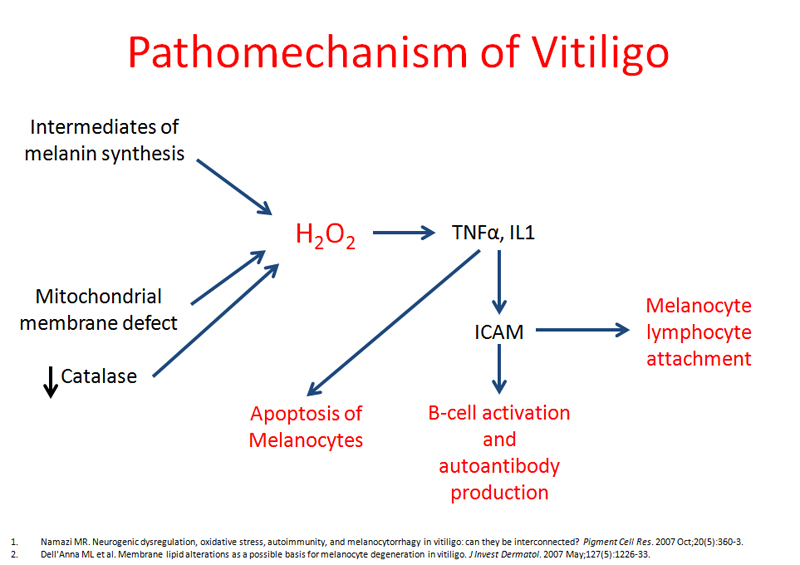 Numerous endogenous and exogenous sources of H2O2 and other ROS have been described in vitiligo, which are deleterious to a variety of melanocytic cellular processes, particularly in the context of impaired cellular antioxidant defense.

Insight into these pathogenetic mechanisms of this common and distressing disorder will offer the potential for better therapies and might even facilitate effective strategies for primary prevention in genetically susceptible individuals.

Between 30-40% of patients with vitiligo have a positive family history suggesting genetic causation. The exact mode of inheritance is not known it is characterized by multiple susceptibility loci, incomplete penetrance and genetic heterogeneity and may involve genes asso- ciated with the biosynthesis of melanin, antioxidant system and regulation of autoimmunity.The risk of vitiligo for children of affected individuals is unknown, but may be less than 10%. Individuals from families with increased prevalence of thyroid disease, diabetes mellitus and vitiligo appear to be at increased risk.

Precipitating causes for vitiligo in a patient with susceptibility include physical trauma or illness, emotional stress and sunburn.

Clinical Features: Clinically, patients present with white patches that could be focal, segmental, generalised (wherein the lesions are symmetrically distributed), lip and tip or acrofacial pattern (where the lesions are seen around the mouth, fingers, toes and lips, nipples and genitalia). Areas subjected to repeated friction and trauma are also likely to be affected. In long standing cases, the hairs within the patches also appear white.

Differential Diagnosis: Vitiligo should be differentiated from many conditions that present with pigment dilution like pityriasis alba (dry, scaly patches commonly seen on the face), post-inflammatory hypopigmentation, leprosy, lupus erythematosus, chemical leukoderma and certain nevi (present since birth and non-progressive). Confirmation is by histopathological examination of skin biopsy that shows absence of melanocytes with mild lymphocytic infiltrates.

Associated Disorders: Vitiligo can be associated with certain cutaneous diseases like alopecia areata (presenting with smooth, bald patches) and premature greying of the hair. Less than 10% of patients may have uveitis in the eye. Vitiligo can also be associated with systemic diseases like thyroid diseases (40% of cases), pernicious anemia (<5%), diabetes mellitus (1-7%, particularly late onset vitiligo) and can be a part of multiple endocrinopathy syndrome.

Course and Prognosis: Spontaneous repigmentation is noted in 10-20% of patients, most frequently in sun-exposed areas in younger patients. This pigmentation is trivial and mainly starts around the hairs. Course is unpredictable; sudden onset followed by a period of stability or slow progression is characteristic.

Vitiligo: Before and With Treatment

General measures: Reassurance forms the mainstay of the treatment. Vitiligo is usually mistaken for leprosy and the patients fear of deformities resulting form leprosy. Vitiligo is not contagious. Emotional upsets can worsen the disease. Sunscreens should be used to avoid sunburns of the depigmented patches and also to avoid new lesions when the disease is active. Camouflage using coloured cosmetics is an immediate remedy that the patient can try.

Specific treatment should be done in consultation with a dermatologist. This includes

Vitiligo is a treatable disease with any of these methods, provided the right method is started at the right time and continued till the cosmetic improvement is acceptable.

Patches that have totally repigmented usually remain so in the absence of injury or sunburn in 85% cases up to 10 years. Those partially repigmented will reverse back when the treatment is discontinued.